Current
readings
available
to
Subscribers
only

This chart shows the daily closing values of our CrystalBull Trading Indicator.   NOTE:  This chart is updated daily, after the market close.  Thus, the last figure may not match the current gauge value, which is a live value (updated every 5 minutes).

HOW TO USE:  The yellow line in the center chart represents the CrystalBull Trading Indicator.  It is displayed in a standard technical analysis format, where a reading above +50 (red line) represents a possible negative trend reversal (market appears overbought, and may trend downward going forward), and a reading below -50 (green line) represents a possible favorable trend reversal (market appears oversold, and may trend higher going forward).  The Indicator chart draws a line from data point to data point, from one day's close to the next.  Where that line crosses the green or red line is not relevant;  Monitor only the data points along the line.

As a side note, the model must calculate its returns at the end of each day.  Thus, it calculates its entry or exit prices as a closing value of the S&P 500 each day.  In reality, a person would have to trade after hours or take the opening price the next day.   The model assumes that the Open the next day will be the same as the Close on the day the signal were exercised.  Of course, that is rarely the case, but is usually quite close, with small variances on either the favorable or unfavorable side.

Also, subscribers receive intraday alerts as to possible changes in the model's position.  There are occasions where the Trading Indicator issues a stock market alert during the trading day that does not hold until the close.  Many times, after an intraday alert is issued, the market reverses, until the condition is no longer valid at the close.  If a person would have acted on the alert, they may have found themselves on the opposite side of the official (end-of-day) model at the close.  In such a case, the investor would need to decide whether to change positions at the close, to be on the side of the official model, or to follow the intraday model.  Here is a chart from 2015, showing the intraday alerts in relation to the official model: 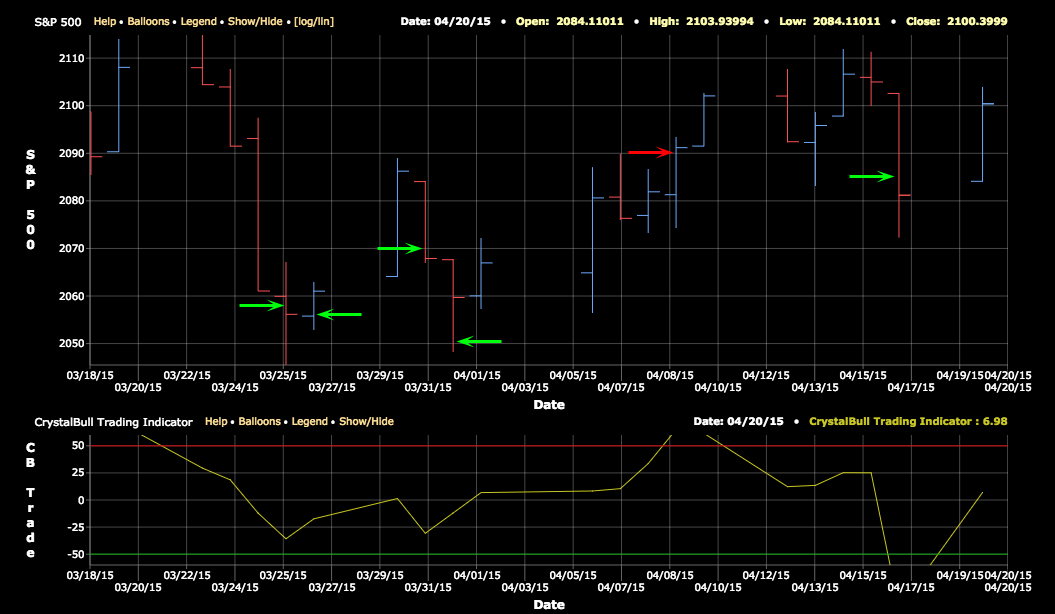 Between 3-26-2015 and 4-1-2015, oversold alerts were sent out during 4 of the 5 trading days. Was the model trying to tell us the market was putting in a bottom? Remember, this was a period when many were scared out of the market at lower levels, and fled to cash. Financial pundits were screaming, "Fire in the theater!", especially on March 26th, which was the short-term bottom. Did any other models pick up those reversals? While the official model was out of the market from March 18th to April 17th, a nice round-trip trade existed in the intraday sub-model.

The CrystalBull Trading Indicator uses a proprietary model to try to determine strength and weakness in the market, and to identify possible entry and exit points.  Our hope is that this indicator may reduce the "buy-high-sell-low" tendencies of the typical investor.

From Dec. 31, 1996 through Nov. 29, 2019, following the CrystalBull Trading Indicator would have, hypothetically, produced a Total Return 79 times that of a Buy-and-Hold strategy (40696% vs. 517%), with an average compound annual total return of 30.1% APR   (The compound annual growth rate of the S&P 500 during this period was just 8.3% APR).  The Indicator had 262 round turn trades (about one per month), and was in the market (exposed to market risk) about half the time.   Click here to see the Historical Performance of the CrystalBull Trading Indicator
Follow us on Twitter
Tweet